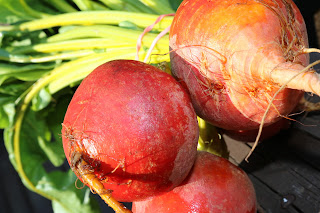 You know Atalanta who was so fast she never lost a race? And the potential suitors who did not beat her in a race would be killed? Until one guy (I forget who), tricked her by lobbing golden apples in her path? It was all Aphrodite's idea, anyway; he certainly didn't think of it. I kind of had that experience yesterday. Well, not really, but I was chasing golden beets and was distracted by them.

I was at the East Liberty Farmers Market and had a plan in my head of exactly what to get to make dinner for the next two days. Sometimes, though, good intentions and too much planning get in the way of taking advantage of what is available right now! I saw the beautiful golden beets at the Harvest Valley Farms stand. I looked at them longingly; I asked if there would still be beets in two weeks (because there is no market next week for Memorial Day), and the answer was, "probably." Since it was not part of my plan, I didn't buy them. But then I could not stop thinking of them the rest of the night and next morning.

A little side note on tastes -- If I had told myself three years ago that I would be longing for beets, I probably would have thought future me had lost her mind. My tastes have expanded and diversified a lot in the past years. My children who are very picky and eat next to nothing besides pasta, crackers and junk food, like to remind me of how much pickier I used to be even four years ago. I would not even consider eating fish then. It was strictly a no touch, no see, no smell situation. Same for beets. I still cannot bring myself to eat "regular" beets. I puree those to add to chocolate cupcakes. But more on that later. I discovered golden beets somehow, and I now have a favorite way to eat them. Golden beets taste much better than red/ purple beets. They are much more fruity, less earthy, more mild. 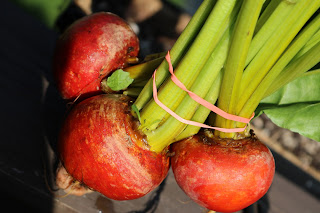 So, I had other errands to run in the vicinity of way up Route 8, so after calling to confirm that the Harvest Valley Farms Market and Bakery had some golden beets, I headed out. It's nice to have a farm market near you. This particular one isn't really _near_ me, but anyway, I imagine it would be nice. The parking lot was super full, but they had golden beets -- two bunches left. They also had all sorts of other delightful fresh vegetables from their farm including asparagus. They said perhaps they would have strawberries next Tuesday (May 31)! So I bought the beets and some other things too and eventually after many other errands, headed home to make (after many chores) my favorite recipe using beets. The following recipe is a combination of many different ones I have seen, including this one, this one, and this one.

Golden Beet Salad (serves 4)
4 medium-sized golden beets
4-8 cups (or so) of spring mix, arugula, spinach, lettuce, or any combination therin rinsed and chopped or not chopped, depending on the size of what you are working with
1/2 cup of crumbled goat cheese feta (or feta or goat cheese)
1 Tbs sauteeing tasteless oil (like canola or sunflower)
1 lb of large sea scallops
1/4 tsp salt
1/4 tsp pepper
2 ripe white (or yellow) peaches cut into large dice (leave these out if they are not in season, but definitely try the salad with the peaches again later if you can)


Directions
Preheat oven to 400 degrees. Scrub beets and trim the ends. Do not peel. Wrap each beet in foil and place them all on a cookie sheet. Cook for 20 minutes (golf ball size) to 60 minutes (tennis ball size), depending on size. My medium-sized beets cooked in 40 minutes. When beets can be pierced easily with a fork (but they should NOT be soft or mushy), remove them from the oven and open up the foil to let them begin to cool. Once the beets are cool enough to touch, rub the outsides of the beets with your fingers to peel them. The peel will fall right off. Chop the beets into 1 inch squares (or so).

While the beets are cooking make the dressing in a large bowl or spouted cup (I use a two cup measuring cup), by whisking all of the ingredients except the olive oil together. When the salad is put together and ready to serve, slowly whisk in the olive oil so that it emulsifies.

Rinse the scallops and pat them dry with a paper towel. Add salt and pepper to scallops. Heat oil in a large skillet over medium high heat. Carefully add the scallops so they have their own space. Cook the scallops about three minutes per side -- until they are opaque. Remove them from the heat.

Put together the salads by starting with the greens, adding one chopped beet per salad, 1/2 peach per salad, 1/8 c. goat cheese per salad, and then topping with whole scallops (each salad should have three to four). 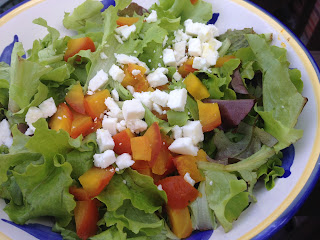